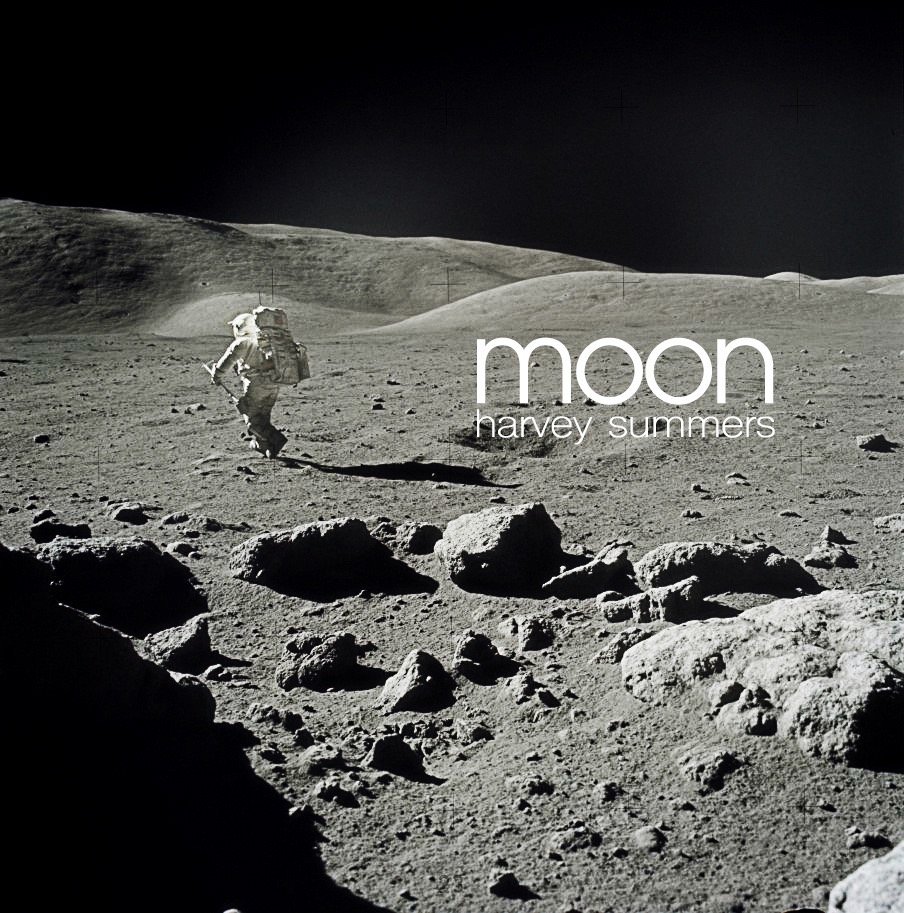 If I were to write about my thoughts on space and traversing this vast realm, it would probably be exactly the same as Harvey Summers, I too wished to be an Astronaut and fly to the far flung regions of deep space, still to this day, whilst I had to settle for Star Trek to satisfy my space fantasies, it stays a huge part of my life and spirituality, and my rock solid belief that life other than our own exists elsewhere in the cosmos, after all, as someone I used to watch said quite aptly, “it is a most logical thought indeed!”

Here Summers explores that fantasy of space travel through the medium of three brave men whom we all know very well in (Armstrong, Collins and Aldrin), the excitement of the moment and the change it ushered in during the late 60’s, so much so, that life would indeed change for everyone in some way, whether they realised it or not.

Moon, is a work of a vast sound-scape of keyboard brilliance, and we take a first tentative step with by the tones and timbre of track one entitled Dreams of Another Sky, a haunting reverie can be found here, the perfect scene setting offering, a hint of Vangelis with the effortless crescendos and the build and progression, this is without doubt, simply the perfect opening composition.

We move with an almost seamless progression to the pieceDeparture, the symphonic gestures here portray the time so brilliantly, even the energy of the grand pomp and circumstance of this decade, lay beautifully in this film score of an arrangement.

For some reason I remembered this moment very well indeed, I remembered Earth Orbit as it happened back in the day, and the excitement it revealed even though it was indeed a nervous segue to the future, here Summers lays a short but poignant offering to break our hold from Terra, as we begin to explore space further.

Telemetry is our next footstep on our journey, and this slice of electronic mastery is a wonderful musical example of a slow and steady movement, pay note also to the build and progression within this offering, it is utterly sublime. Telemetry is indeed set and we are firmly on our way, the intensity but also determination of this track also has to be highlighted.

My favourite subject, The Void, this comes in two parts and explores everything and nothing, and the most beautiful aspects of galactic importance, images of the sheer vastness of space can most certainly be felt through the tracks The Void Part 1 – Everything andThe Void Part 2 – Star Stuff. This is a duo of very classy ambient electronic music, I’d be most proud to have produced something of this amazing quality, for it literally, through its compositional structures, paints a musical picture of the magical immeasurable size and beauty of space.

Spacewalk is a true empty vessel filled with a gentle floating musical narrative, which once more portrays the drifting reality of the astronauts stroll into space. The gentle performance on piano here is idyllic and creates a wondrous set of images, ones that are only enhanced further through the keyboards and delicate synths of the artist.

The moment has arrived, in the papers we were given many diagrams and pictures of how this would all go. Lunar Orbit Insertion was simply breath taking and that is exactly what Summers has manifested for us here on this utterly exciting musical narrative, the apprehension, the suspense and tension of the moment, it is all here on this powerful, yet moving opus.

Descent is quite brilliant, I adored the silence with which this track started, then the slow build and progression was akin to the opening of a movie, and created with a slight minimalistic feel to begin with. One can really feel the deliberate but downward movement; the later symphonic manifestations on this track were perfectly arranged, and a classical sense of drama was added to the proceedings.

The moment would come when those Small Steps, would be giant ones. I think I was a crying 12 year old when this happened it was so magnificent, and I wish to thank the artist many years later for creating a piece of music, that I wished had of been around in 1969, the keyboards and synths used truly rekindled that magical moment for me once more.

I have always thought it must be quite a spiritual moment to stand on an alien world and watch your home planet rise into the darkness of space, on Earth Rising we have just that, a perfect slow mirror look at first light, once more the importance of build and crescendo can be found here, and it is done with utter perfection, try closing your eyes whilst imaging this fantasy, and listen to this offering, it is quite stunning indeed.

Our penultimate piece before we return to our home world is Sleeping L.E.M and is a more ambient offering to float with. The sensitive and almost dream like narrative is gradual and calming to listen to. The soft but crafted performance on keyboards here was stunning to behold, and simply idyllic to drift off into a peace filled reverie with.

So it is time to blast off from the Moon and head home to Earth, and we have the perfect composition to do that with in the last track off the album entitled The Journey Home. A slow, but progressive piano sweetly portrays a steady but assured outer trajectory, and once joined with the sweet symphonies of space we are gifted a track that David Arkenstone would have been proud of, and simply the best offering with which to conclude the album with.

Moon by Harvey Summers has to be one of the most outstanding albums I have heard this year by far; it is perfectly performed and produced, and could easily be the music to a film documentary in its own right. For me, I got to relive a moment in Earth’s history, a moment I will never forget, however I do wonder if we can convince Harvey to take the advice of Arnold Schwarzenegger’s character from the Total Recall movie, by getting himself to Mars for the next one! Moon is indeed an album that any sane music purist must at all costs have in their library; it would be simply an empty void without it.

Dreams of Another Sky

← Prev: Modular synths - down the rabbit hole for the win! Next: Moon at No.1 in OWM Album Charts! →

The page you requested could not be found. Try refining your search, or use the navigation above to locate the post.