Modular synths – down the rabbit hole for the win! 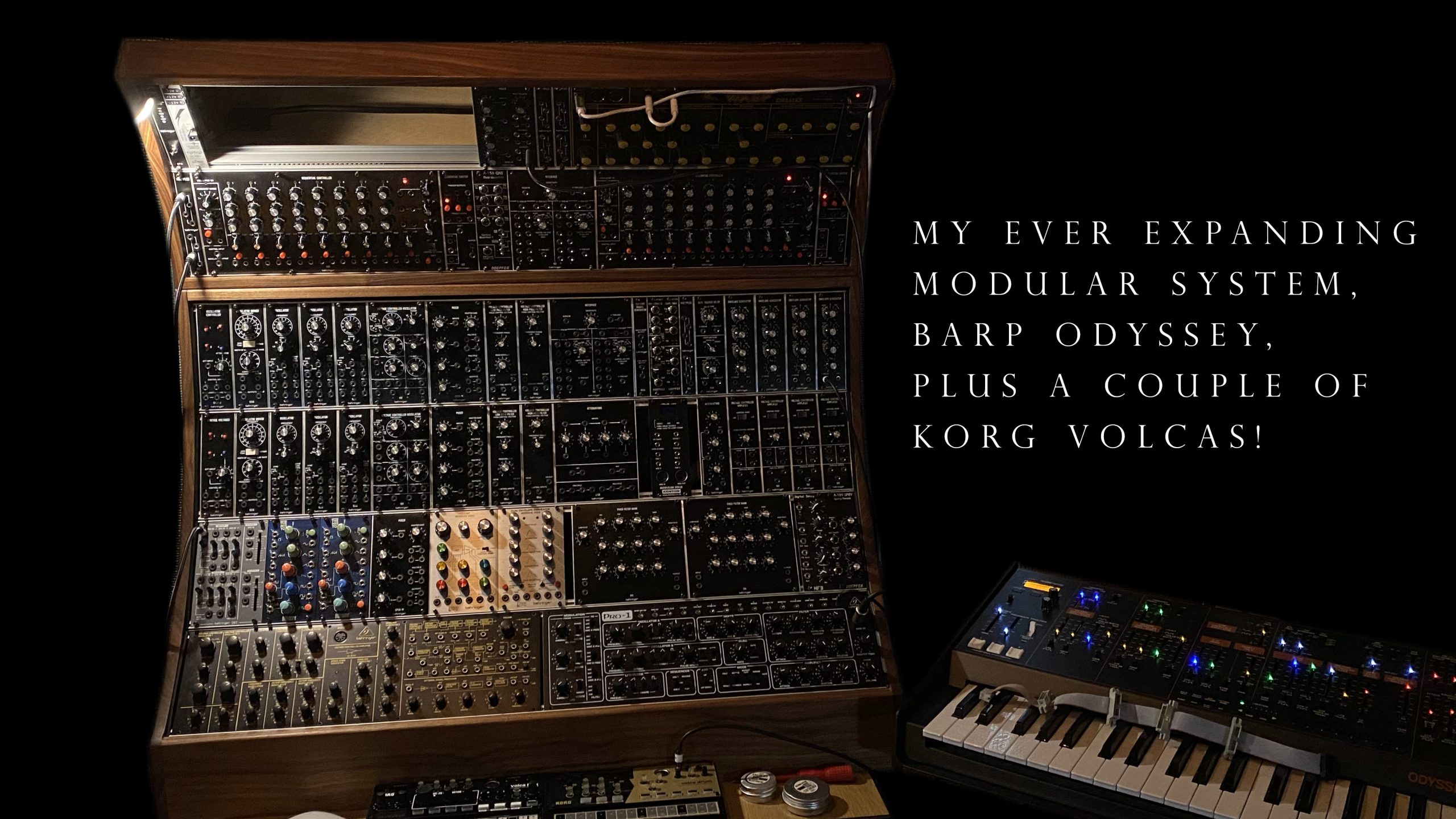 Ever since I first sat on the floor of the local music shop, aged 5, while my father discussed drums with the owner, and I played with an EDP Wasp Deluxe, I fell in love with electronic machines which made noises. That was a pivotal moment for me. Growing up, I found a few family friends had analog synthesisers. I was rarely allowed to touch them but they intrigued me. By the age of 11, I’d decided I wanted in. I saved up and contributed that money towards my Christmas present that year (we weren’t wealthy), and got a cheap Yamaha PSS-170 keyboard. It wasn’t the analog synth I’d fallen in love with but it was a start. In fact, it was this which really started me thinking about music as well as just ‘sounds’. I’d been dabbling with electronics as a hobby for years and loved anything futuristic or vaguely sci-fi. Now, it seemed, those interests were finding a home. This was the beginning of my love affair with music and technology.

Through my school years, I planned synth builds which never came to fruition, purchased a number of second hand synths which were very cheap back then, I had a Moog Prodigy, Roland MC202, Sequential Pro-1 and was gifted a faulty Polymoog! I even had a TR808 drum machine. I sold all of these now highly sought after machines for peanuts at the start of the digital revolution. I had no idea they would be worth ten times what I’d sold them for just several years later.

My love of these machines never left but like many, my setup was mostly digital throughout the 90’s and 00’s. Only when I embarked upon my ‘Moon’ album at the beginning of 2020 did I finally decide it was time to go analog again! And my timing couldn’t have been better. Although all of those vintage classics were then way over priced and out of reach, companies like Behringer had started making very good and remarkably cheap clones of the classics I knew and loved. I was able to buy the Poly D (a minimoog clone), K2 (MS20), Pro-1, Odyssey and even their clone of the WASP Deluxe which had started it all. But perhaps most exciting of all, they began releasing their cloned Moog System 55 modular series in Eurorack format. It was now possible to build a dream modular synth for the price I’d pay for one or two single modules if I’d bought originals. As a newbie to eurorack, it was a commitment I was only too happy to make!

The system continues to expand as I’m adding Behringer’s ARP 2500 modules and several others from other manufacturers as I began to understand the possibilities and the limitations of what Behringer had to offer. I’m just now building a bigger power supply system as my modular monster has grown faster than anticipated! It looks gorgeous in its hand crafted walnut case, made for me by the wonderful Mark Johnson of Penny Hedge Designs. He also built an expansion case for me to bolt on top. Now it’s a towering 18u of 161hp.

All of the synths have featured heavily on my Moon album, alongside some wonderful digital machines including the ASM Hydrasynth and Korg’s Wavestate (I was a big fan of the original Wavestation). I also made use of a few virtual instruments – computer based versions of synths I couldn’t get my hands on including Arturia’s excellent V collection and Roland’s comprehensive suite too.

I’m excited to get cracking on my next project which will feature the vintage electronics even more. I have load of ideas and some themes in mind… maybe I should finish my Cellar Door project first though! It’s just so hard to exercise such restraint when surrounded by all these beautiful machines.

Since childhood, I’ve been fascinated with space, the moon and science. Lately, with the 50th anniversary of the historic moon landings, I got to thinking about those missions. Especially the pioneering and utterly remarkable Apollo 11. There were lots of great documentaries and movies around which had all further fired my imagination. At the same time, I was eager o return to another life-long love of mine, analog synthesisers.

So, I built the perfect little studio at home to create the sound of space in the late ‘60’s! Combining my orchestral writing with the electronics was key. I spent most of 2020 composing and recording this ‘movie without pictures’ which I would describe my own childhood imagined mission to the moon, as well as paying homage to the Apollo 11 mission. For the most part, the album follows the narrative of NASA’s mission. But I did take a few artistic liberties in order to expand upon certain ideas and themes such as “The Void” and “Spacewalk” etc.

Currently, the album has been ‘soft launched’ while I am talking with labels about a full release. So it’s exclusively available from my store, www.harveysummersmusic.com in 24-bit download, mp3, flac and very limited edition CD formats. It will be coming to iTunes and all the usual stores later in 2021.

I hope you’ll enjoy listening to the previews and checking out some of the related videos here. You can also preview the entire album before buying over at harveysummers.Bandcamp.com

The page you requested could not be found. Try refining your search, or use the navigation above to locate the post.